I’d like to share with you all an adventure I went on during Thanksgiving Weekend at the New York Historical Society in NYC!

In honor of the 20th anniversary of the U.S. publication of J.K. Rowling’s Harry Potter and the Sorcerer’s Stone, the New York Historical Society opened up the entire lower half of the museum to devote it to all things Harry Potter! This exhibit, Harry Potter: A History of Magic, includes original material from Harry Potter publisher Scholastic and J.K. Rowling’s own archives, cover artwork designed by illustrator Brian Selznick for the 20th anniversary edition of the Harry Potter series, and Mary GrandPré’s illustrations created for Scholastic’s original editions of the novels—on display to the public for the first time.  You can also find century-old treasures including rare books, manuscripts, and magical objects from the collections of the British Library and New-York Historical Society, as well as medieval descriptions of dragons and griffins and the origins of the sorcerer’s stone, explore the subjects studied at Hogwarts and see original drafts and drawings by J.K. Rowling as well as Harry Potter illustrator Jim Kay.  An added bonus are the costumes and set models from the award-winning play Harry Potter and the Cursed Child. The exhibition is also accompanied by a special audio tour featuring the voice of actress Natalie Dormer, providing in-depth content on the objects on view.  Basically, there was a lot of fantastic content all about this iconic series! (All of this information is what I’ve summarized from my experience and taken additional material from the main webpage, so be sure to check out the site for a fuller explanation.)

I’ve been a huge fan of the NYHS over the years – I highly recommend checking out their other wings after you’ve finished the Harry Potter exhibit.  The Tiffany Glass and Women’s History sections are so incredible!

I simply had to dress the part when visiting this exhibit.  And yes, I am a Slytherin (I swear we’re not all bad). Incorporating green, black, and grey into an outfit wasn’t that hard, thankfully, as I already have a lot of those colors in my wardrobe. 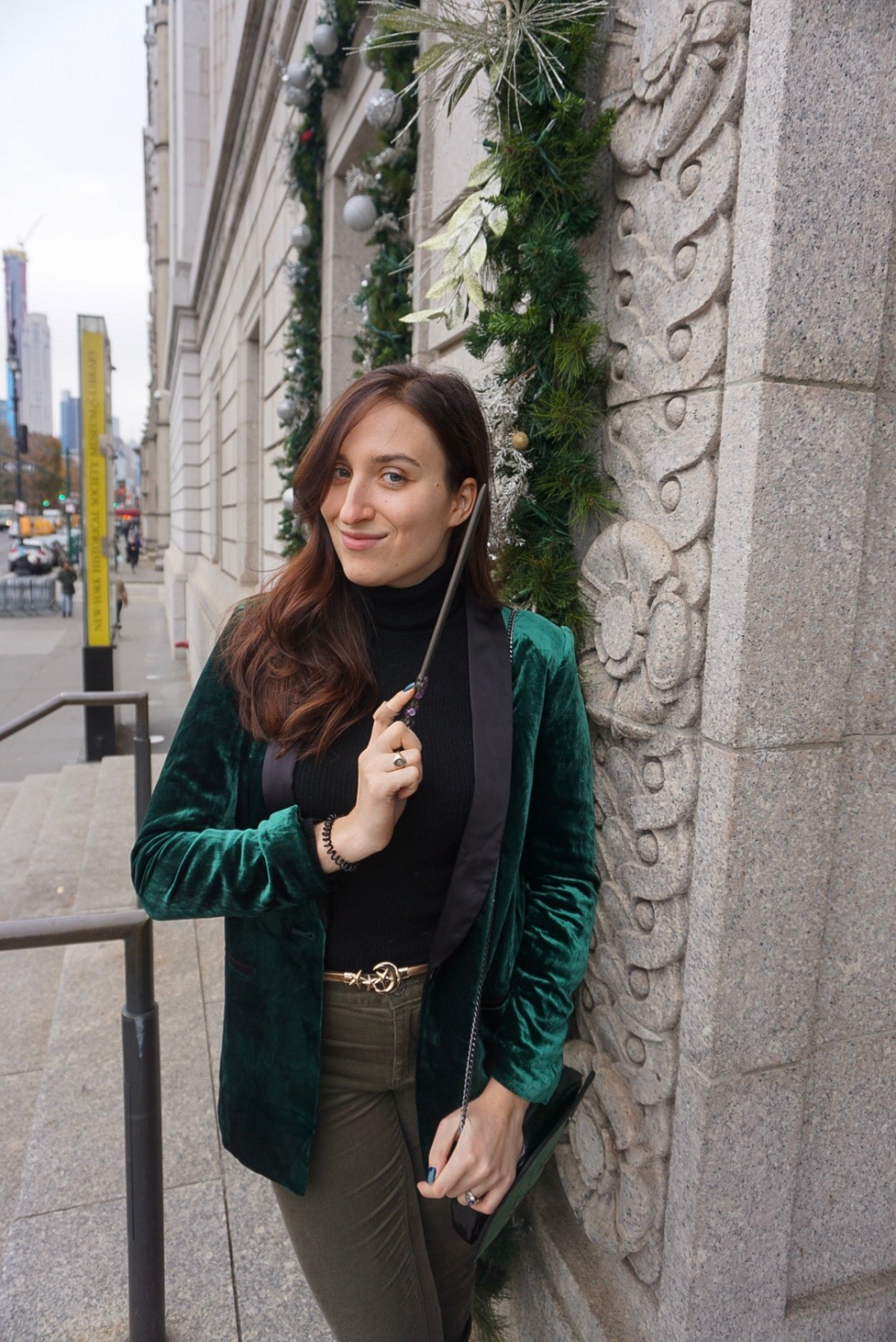 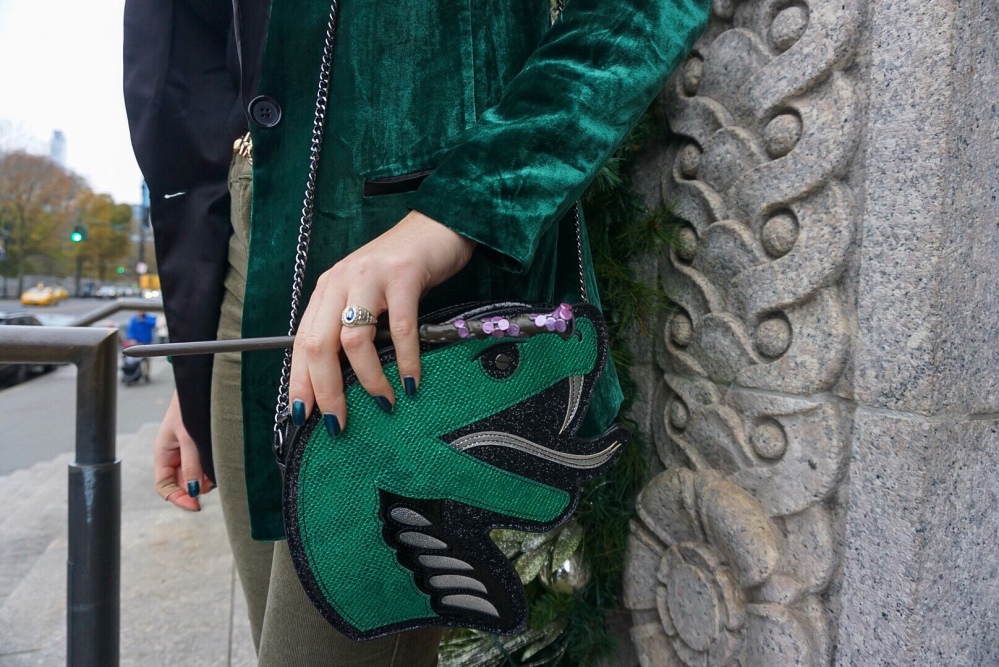 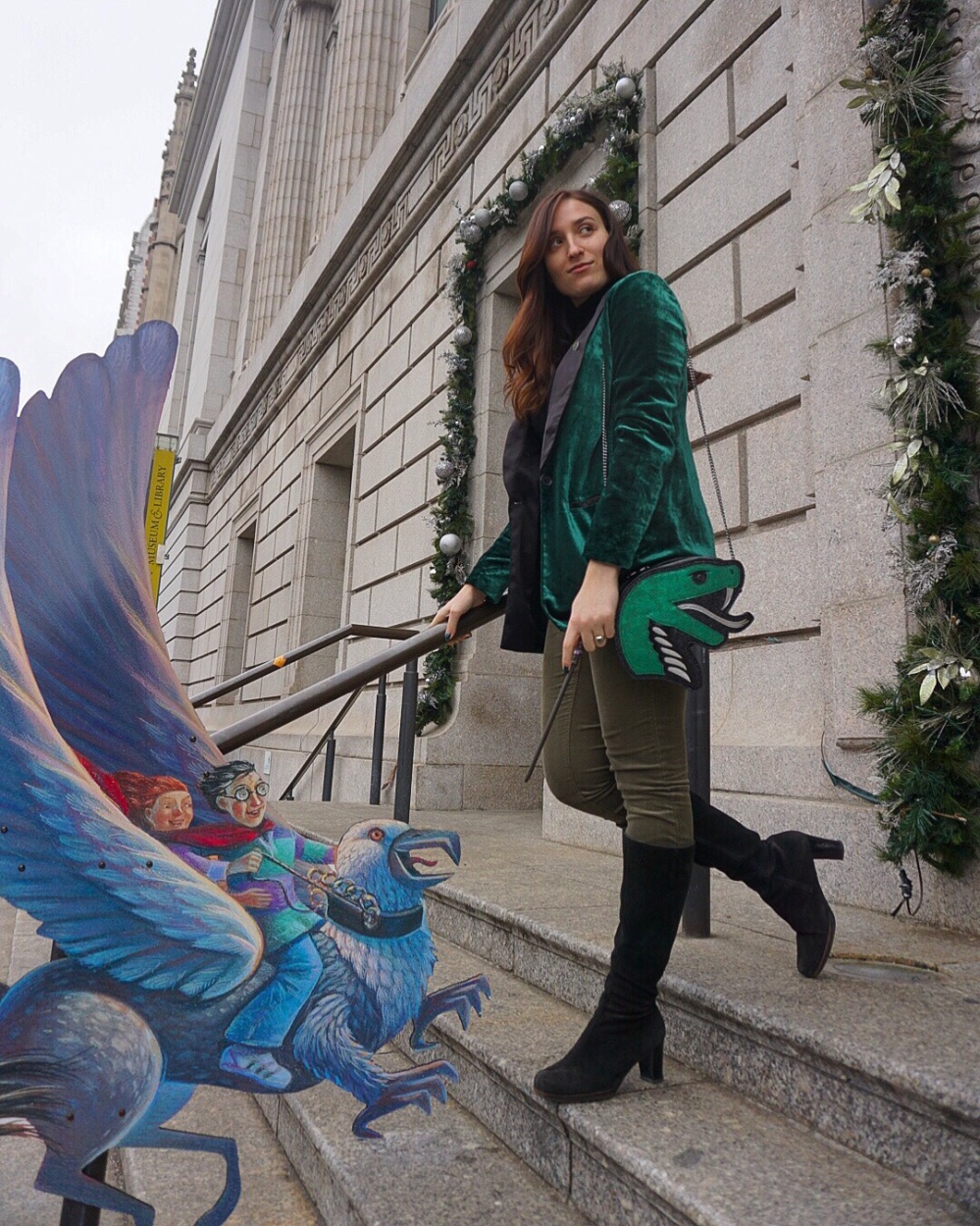 When I first discovered I was officially a Slytherin through Pottermore, I expected it but was still a little disappointed.  Whenever I take a “which Harry Potter House are you” quiz I always end up getting Slytherin, no matter how insignificant the quiz.  My personal take on being a Slytherin changed once I learned more about the House and it’s characteristics: ambitious, shrewd, cunning, strong leaders, and achievement-oriented. Slytherins also have highly developed senses of self-preservation, which means that they tend to hesitate before acting, so as to weigh all possible outcomes before deciding exactly what should be done.  I’d like to think that a fair number of these descriptors apply to me and made me become more proud to be a part of this House!

I’m a huge fan of dressing for events or donning any kind of themed costume, perhaps stemming from my love of Halloween!  I loved this opportunity to embrace my inner Slytherin and wear my house with pride, pulling from many pieces I already had in my wardrobe.  It was so much fun walking through the exhibit and seeing other fans dressed in their House colors, too! Additionally, the green velvet blazer and rustic corduroy pants are seasonally appropriate and could definitely be taken to any festive friend gathering or work party this winter! (Minus the wand, of course!)

No photographs are allowed in the exhibit, so I took this outside the NYHS.  It was so nicely decorated for Christmas with the beautiful Harry Potter illustration at the entrance, which made it the perfect location to showcase my Slytherin style.

Harry Potter: A History of Magic runs through January 27, 2019, so be sure to snag your tickets to see this amazing exhibit before it closes!